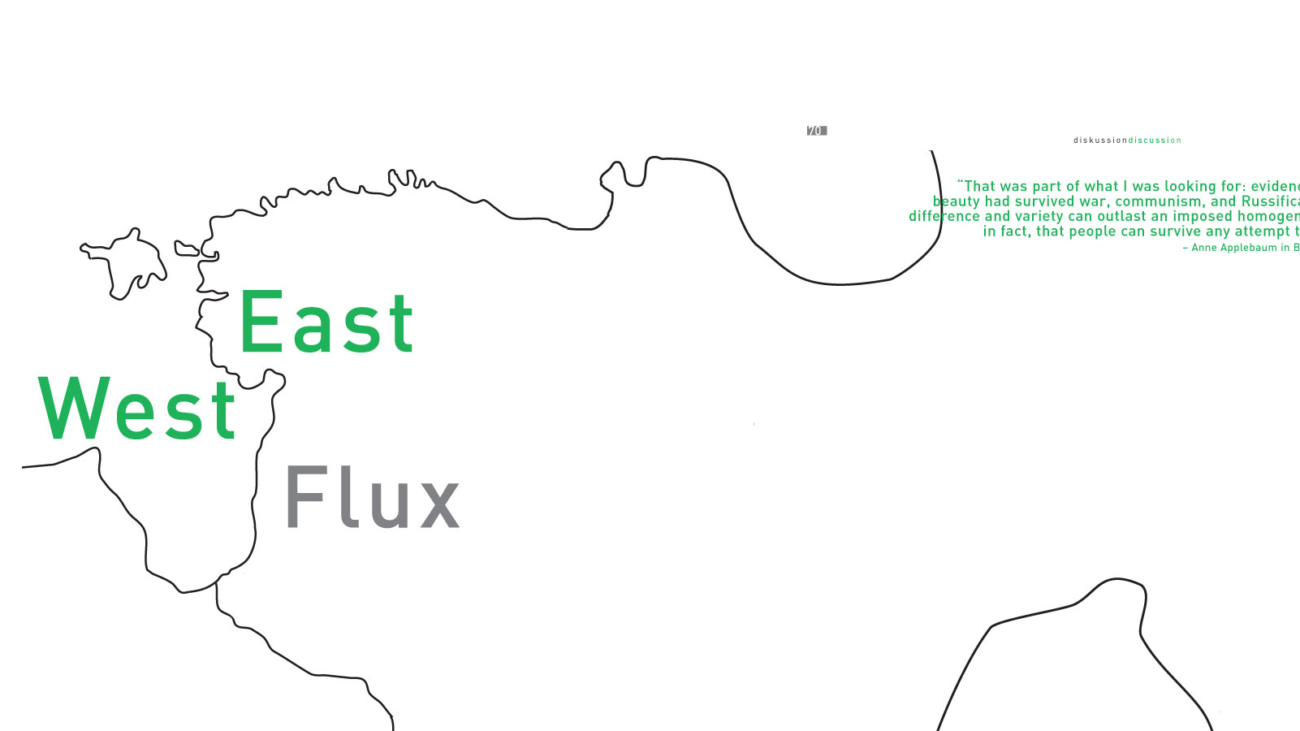 When I first picked up Anne Applebaum’s book Between East and West I was nearly twenty years old and thought I knew a good bit about the lay of the land in Europe and the former Soviet Union. Her book proved me embarrassingly wrong, as I’d not heard of many of the places she mentioned: Vilnius, Perloja, Radun, Kaliningrad, Kishinev; all places of important transition in the East, places with rich traditions, contrasts and intertwined histories, places that perhaps chart the conversion of empire-to-nation better than any, but places that were never mentioned in my school. Applebaum know this geography well. While she is best known for her latest Nobel-prize winning book Gulag, A History, a book that could not be more important in this time when everyone is a bit unsure of the real definition and proclivity of that large landmass known as Russia, her first book and one that resonates most with many people my age in Berlin, is Between East and West.

Gulag is rightly praised. It is a brilliant and well-researched look into the Soviet concentration camps that held millions of prisoners under communist rule. These were places of repression and terror that before had gone almost undocumented. At a time when “a vast majority of elites in Europe and the U.S. are concerned about Russia’s retreat from democracy” (Aspen Institute 2005), it seems right that those elites might start to learn a bit more about the history of the power that concerns them. But it also seems a good time to get to know the borderlands, the crumbs of the nation-obsessed mind, the once- Russia, now independent or trying-to-be. Places like Lithuania, Belarus, and the Ukraine are some of the most democracy and/or totalitarian prone places in the neighborhood of Europe. These are the places where change is both crucial and opposed, needed and yet often threatening or dangerous for its people.

When I asked Ms. Applebaum about the current situation in Belarus, she summed it up as “A dictatorship run by a crazy person.” But she also went on to say that there was an opposition in Belarus, and that the West needed to do as much as possible to expand civil society and address the opposition there that favors democracy. With the Orange Revolution in the Ukraine, I noticed that myself and some of my (intelligent and otherwise well-informed) friends in the States actually began to talk about this till then unheard of place, a land that suddenly had the papers in America debating whether its amazing revolution was or was not “an American creation, a sophisticated and brilliantly conceived exercise in Western branding and mass marketing”. Americans, I often here, like to believe that everything somehow relates back to us. When I asked Ms. Applebaum about this theory, she said:

“The US had no strategic need for the Ukraine. They don’t have any oil and there’s no reason why we would be there except for democracy. Far from it being a plot, I think most people in America were shocked.”

“I was surprised just because my previous experience with the Ukraine wouldn’t have led me to think that they had that much national energy, but clearly they do now. I was very pleased.”

She went on to say that her husband, a former Polish politician who now works for a think tank in Washington, had actually been quite involved in the process, working there as a vote monitor. The current situation in the Ukraine certainly becomes more interesting when one knows a bit more about its history, a history that Applebaum touches on fairly extensively in her book. She wrote Between East and West out of her own personal travels through the lands between the Baltic and the Black Sea in the early nineties, just after the fall of Communism. This was the time just after the collapse o the Soviet Union and people were reasserting old identities while simultaneously trying to rid themselves of the past. They were excited but unsure of how to continue in a world where they were again allowed to create and believe in their own identities, identities that had been passed around and renamed more times than the current generation could even remember.

In her first book, Applebaum takes trains and walks through these borderlands, interviewing people who live in Lithuania but consider themselves Polish, or who live in Belarus but adamantly demand to be called Lithuanian. It is clear that the people in these lands have learned to have a strong definition of themselves in relation to something external, but what that external is changes from doorstep to doorstep. In fact, in some of Applebaum’s interviews, it becomes very difficult to see any lines of demarcation outside of the mental boundaries that these people have erected; people’s definitions of allegiance are rather formula-less, all word of-the-mouth but central to the lives of those who hold them. Sometimes it isn’t even a land they identify so strongly with but a religion. Ms. Applebaum told me that in some places she’d ask the people “What are you?” and they’d respond “Catholic” or “Orthodox” and when she’d say “Where are you from?” the response was often “I’m from here” “Tutejy”.

I asked Ms. Applebaum what had led her to travel and write about these places, and if it was difficult for her to make this journey during such a time of change.

“I guess it started because I was living in Poland in the late 80’s [working as the Warsaw correspondent for The Economist] and while living there I met a lot of people who were from the East and the Baltic States and Ukraine. At that time, there was a lot of action there because they were just getting ready to declare their independence. I asked myself why I knew so little about these places, so that created a natural inclination on my part, but it was also a news story. I first went as a journalist. I did the trip that the book was based on in the early 90’s, just after the Gorbachev coup. In many ways, it was actually easier to travel then than it is now. It was so unusual to see Westerners then. People were very nice to you and helped you as much as they could. It was a very odd moment because communism was gone and it was before any of the mafia untergroups had really been organized. One didn’t have the sense that it was dangerous. Nobody was independent yet, so there was still this feeling of potential about what was to come.”

I wondered if all of her work with people who had such varied and complex histories had affected her opinion of what it means to be defined by a nation. We inevitably began to talk about the current debate on immigration and I asked for her views about the situations in the EU and the U.S.; of the different ways that this problem is being dealt with, ignored, or handled.

“I think there are very different traditions [in the U.S. and Europe] and naturally this is reflected in their policies. Here in the U.S. there’s a tradition of thinking ‘anybody can become American, all you have to do is take an oath, etc. If you’re born here, you’re automatically a citizen, but in Germany, there is a very different definition of nationalism and nation, one based much more on ethnicity and inheritance. For that reason, Germany has had a lot more trouble with immigrants in terms of how to accept and take them in. But I think that’s Germany’s prerogative. I don’t think every country has to be just like the United States.”

Not sure I understood clearly and wondering if  this was a little one-sided, as the United States is certainly having its own immigration problems as well, I asked her if something was being left out of the picture she’d painted. She agreed with that, but said that the point she wanted to make was that the very perception of immigration is different. In America, we are quite use to having people come in and assimilate, but she finds that this is not so much the case in Europe where people have firmer ties to one distinct idea of nation.

“The trouble for Europe is that while its legitimate for Europeans to have a different definition of nationalism and for them to have a different idea of who is Dutch or who is German or French or whatever, I don’t think they’ve given that enough thought, or they haven’t figured out what to do with people who aren’t easily assimilable once they’re there. So then you get these phenomena like what you have in Holland and parts of France where you have these big Muslim slums at the edges of major cities. Everybody knows it’s a problem, but nobody’s been able to come up with the answer yet.

You just can’t solve a problem like this quickly. It’s something each country has to work out on its own. Your definition of what you are as a nation isn’t something that changes in a day and I
don’t think you can just pass a law and make it better. It’s something that will have to change over time. People need to continue thinking about what assimilation means and how they’re going to structure their citizenship and so on.”

With all the current discussion of immigration, it’s helpful to read some of Applebaum’s early interviews with people who perhaps have never had a consistent, chosen land or nation but who nevertheless have a very distinct sense of community identity and history. Much of this is based on language and tradition, but as borders become more and more fluid, it seems obvious that one small way to ease the birth of a more global identity is to understand a bit more about each other’s past. In this sense, Applebaum’s books and work provide a necessary documentation of voices that are oftentimes the ones who could teach us the most about the present, but who are, ironically, the least likely to be heard.