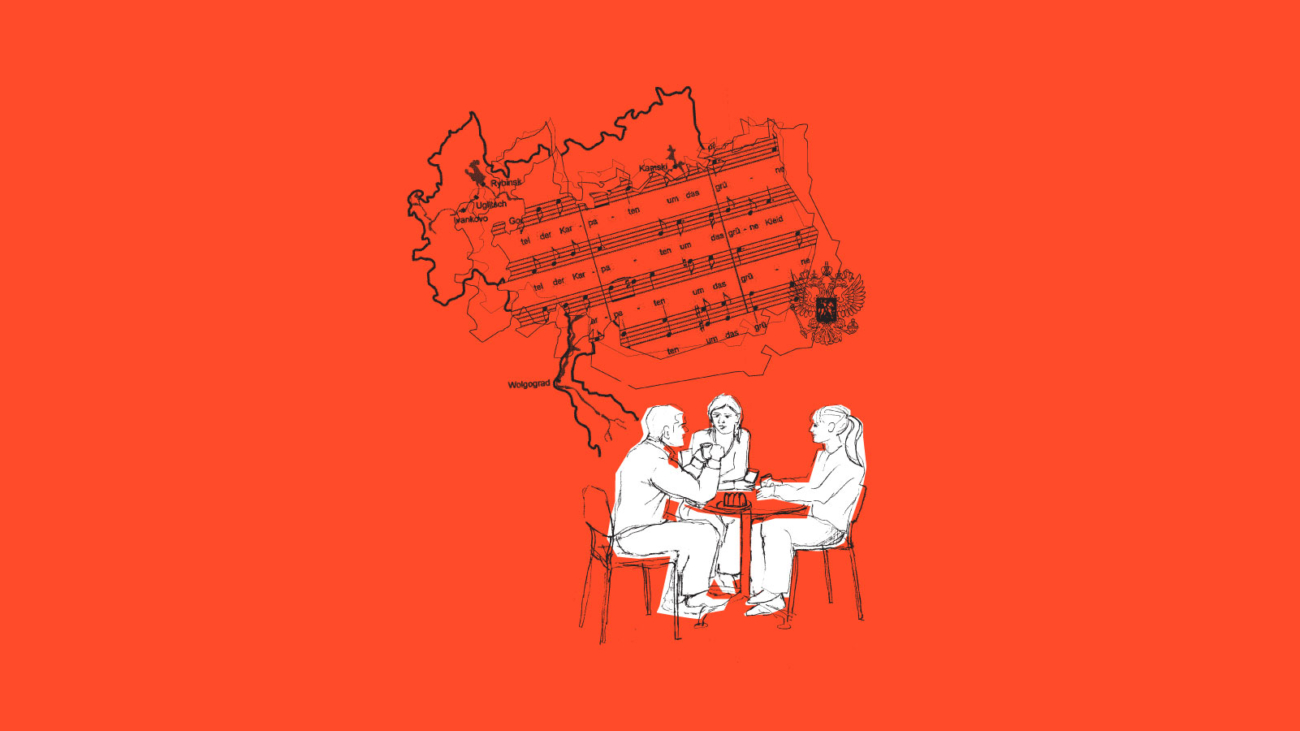 There are three people sitting in a room together eating crumble cake and drinking coffee – one is from London, one from a small town in Kazakhstan, and one from Siberia – and all three of them are speaking German. The two ladies from Siberia and Kazakhstan are Spätaussiedler and, well, German is their mother tongue. And the Londoner (that‘s me) speaks decent German because he studied it in London. All reasonable enough. But you might be wondering just what I mean by “Spätaussiedler”? Perhaps it’s best translated into English with the expression “Russian Germans”, but this still leaves out a lot of the story…

Russian Germans can be thought of as Germans whose ancestors migrated to Russia, many of which have now migrated to Germany again. Today more than 2 million Russian Germans live in Germany, many of them having migrated in and after 1989. Many of these Russian Germans, even while speaking perfect German, are still sworn at as Russians by others in Germany. Today it is difficult to determine their status but this complicated history stretches back over more than 200 years.

In 1763, the first Germans travelled from the Holy Roman Empire and its dukedoms to Russia because the Russian Tsar Katharina II decided Germans should colonize Russia. The settlement of Germans in Russia began with Katharina’s invitation manifesto on 22nd July 1763 when Germans from Hessen and the Rhineland settled in the Volga area (Volga steps/ Volgograd), known today as the former Soviet Union. This colonization spread towards Petersburg and the Black Sea, until a total of 104 such colonies had been founded in the Volga area. One reason, amongst others, that so many Germans migrated was the privileges they received at the time – privileges including freedom of religion, tax exemption, exemption from military service and state support for resettlement. Life was fine at first, but the situation of the Germans in Russia worsened in the 1880s when Slavophiles feared a Germanisation of Wolhynien, Podolien and the areas around Kiev, and the initial privileges given to the Germans were taken away. Times were dark until a provisional government relieved the situation around 1917 and introduced civil rights for all citizens in the area. They could not, however, avoid the politics of collectivisation, and by 1931 more than 95 percent of private property on the Volga had been nationalized.

Changes of power in the Soviet Union also exerted a massive influence on the Russian Germans’ status and comfort. Stalin was convinced these German colonies represented a major danger to Russia’s stability. As early as 1934 the Soviet authorities began compiling lists of Germans living in the Soviet Union that should be deported. The situation reached its climax on August 30th 1941 when all Russian Germans were forced to leave the Volga area. The decision was quick and drastic: only 48 hours before having to depart, Russian Germans were told that they must leave and issued a small card allowing them to take a maximum of 50 kg luggage.

In total 400,000 Volga Germans, 80,000 Germans from other areas, and 25,000 people from Georgia and Azerbaijan were driven to Siberia, Kyrgyzstan or Kazakhstan. Upon arrival in these locations, they were told they could no longer leave the region, regardless of the reason. Speaking German was also forbidden (although many spoke it at home nonetheless) and all Germans wishing to be issued with German passports lost other rights in the new society. Although this was naturally a very difficult time for the Volga Germans, it was not until October 1988 – when Chancellor Kohl met with Gorbatchov to discuss the situation of these Russian Germans – that the idea of issuing exit visas for them became a possibility. After many long discussions, the visas were eventually granted and people were allowed to come back to Germany, thus beginning the new migration in 1989. But by that time coming “home” was not so easy either. Many of these people considered themselves German even as they were growing up and living in the former Soviet Union. But once they had the chance to live in Germany, the Russian Germans were often discriminated against by the “real” Germans because of their past in Russia.

Such a situation raises some difficult questions about national identity. One must ask: does one have a different national identity if they are from a country but did not grow up there? Is “being German” defined by a bloodline or is it defined by society and language? How many years can a person be absent from a country without losing their ties to it? And what about the third person in the room? What about me? I live in Germany and speak German, but I was born in the UK. Does that mean I will always be English? If I stay in Germany for the rest of my life and many years later the grandchildren of my children want to return to the UK, will they still be welcome there? Or will they have the same problems the Russian Germans have faced? These are all complex questions, questions that I may not have the answers to at the moment but questions that nonetheless promise to present themselves more and more to all of us in the future. They are questions we must continue discussing. And perhaps one way of doing that is to look at groupssuch as the Russian Germans and understand their current and past situation. If we can understand how these people have constructed their identity, we can better understand how to deal with similar problems in our fast-approaching international future.

This article summarizes Chapters 4 and 5 in Sarasin’s book “Fremde Heimat Deutschland – Eine diskursanalystische Studie über die nationale Identität der deutschstämmigen Spätaussiedler aus der ehemaligen Sowjetunion”. It can be ordered in all bookstores in Germany or direct from the publishers at www.jhjj.de.