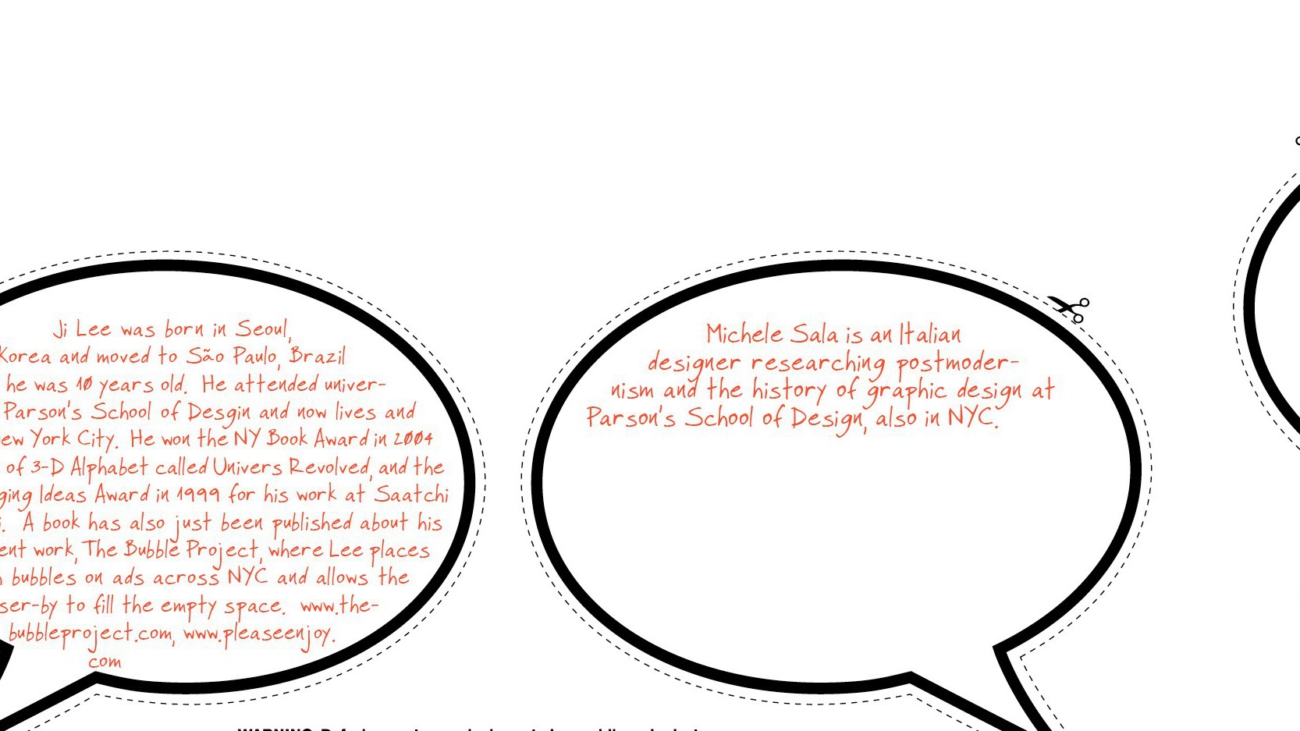 In the late 1980s the biggest argument concerning the theory of Design was over the difference between Art and Design itself. Pure Modern Designers taught design students about applied art – the ‘applied’ turning the holy idea of creativity into something useful, the noblest non-art. But such a definition of Design has never quite fit: designers have always played a fundamental role in the history of art as well, remaining as likely to propose a problem as they are to solve it. Nowadays Design seems to have won its own society. In his essay “Design and Crime” (2002, Verso), Hal Foster quotes the infamous attack launched by Adolf Loos (“Ornament and Crime”, 1908) on the Modern project of Gesamtkunstwerk (total-artwork), in order to analyse the problems raised by design’s ubiquitous penetration into contemporary life.

“Products are not anymore thought of as objects to be produced, but as information to be manipulated”, writes Foster, claiming that design now abets a perfect circle of production and consumption, informing buyers’ needs and ideas, and creating a world that does not leave enough “running room” for user’s subjectivity. The idea of the artist-as-engineer is gone, and the industrial designer now rules a world where he works according to the client’s interests rather than as a craftsmen. In such a scenario, the work of Ji Lee constitutes quite a paradox. Ji Lee is both a designer and an artist. He designs ads, but he also fights them. Four years ago, Ji – then working at one of the world’s biggest ad agencies, Saatchi and Saatchi – began The Bubble Project (www.thebubbleproject.com) plastering blank bubbles on top of commercial ads all over New York City and letting pedestrians fill in the blank spaces with their own comments. “The goal is to counterattack the media messages we receive”, says Ji, “in order to convert the corporate monologue into a true public dialogue”. But can such contradictions really coexist?

MICHELE: Your bubbles generate opportunities for social relationships, what Nicolas Bourriaud quoted Marx by calling social interstices. Or, to borrow another of Bourriaud’s terms, it could be said that you provoke people to become ‘semionauts’, linking different contexts to a common co-text. Do you ever think about the relationship between art and design in such terms?

LEE: People often ask me: “Are you a designer or an artist?” or “Is this an art project or a design project?” Of course these questions made me think and the conclusion I reached is that I’m both designer and an artist. I’m a designer when I’m doing projects for clients. I’m an artist when I’m doing my personal projects. The two worlds compliment and influence each other: creatively and economically.

Do you think there’s a way in which The Bubble Project helps people take back a bit of that “running room” that Hal Foster was talking about?

The Bubble Project instantly transforms boring and intrusive corporate monologues placed in public spaces into fun public dialogues. People are for the most part passive recipients of these media messages. The Bubbles shift this platform upside down by giving people the opportunity to become active participants, thus empowering them to face the media. In a bigger picture, it also serves as a glitch in the matrix, an interruption in the routine of daily life.

What kind of message would you like to read on your bubbles? Have you seen any particular homogeneity in the messages written by the passers-by? Do you see any particular ‘direction’ to what they write? I’m trying to understand how people actually use this “running room” or new space that the bubbles open.

I believe all messages are valid. The fact that someone stops from his or her routine to look at the bubbles placed on top of the ads, thinks about something different, takes a pen and fills in the bubble is what counts. In this short moment, the person breaks out from the routine of the daily pattern and becomes a creative and an individual thinker. So it’s the context, rather than the content, that matters to me.

I’m a facilitator and at the same time I’m an observer. As a facilitator and the creator of this context, I have absolutely no judgement or preference about different content inside the bubbles. Anything is valid. As an individual observer like any other passer-by, I have my personal opinions and preferences about the contents. My only rule in doing the Bubble Project is that I never fill in the bubbles myself.

As for common topics inside the bubbles, the most popular one is sex. I think this is obvious, because most people feel oppressed sexually and the anonymity of the bubbles allows them to break out of that oppression. But otherwise there is a wide range of expressions, as wide as life itself. After looking at them for a while, I realized some bubbles formed natural groupings by subjects soI divided them into 8 different categories: Social Commentary, Media & Fashion, Politics & Religion, Sex & Drugs, Art & Philosophy, Humor and Personal Messages.

Some believe that what defines Art and Design is the artistic intention for the former, and the presence of a client for the latter. You don’t have a pure artistic intention, not even a real client. Can your work still be called ‘applied art’?

I‘m a designer when I‘m solving specific problems for clients, and I‘m an artist when I‘m doing my own projects. I create art because it gives me a deep satisfaction that my design projects can‘t provide. At the same time, these two worlds complement each other because I end up applying some of the lessons and tools learned from my design experience to my art projects and vice versa.

As far as ‘artistic intention’, I don’t know what that phrase actually means. Artistic intention sounds like a method or a preconceived plan. Art is not about a method to me. Art is about personal expression and an urge to do it. I’m not concerned about defining myself or defining the things I do. I’m interested in messing up the numbing comfort of the mindless routine, and having a lot of fun while I’m doing it.

Ji Lee was born in Seoul, Korea and moved to São Paulo, Brazil when he was 10 years old. He attended university at Parson’s School of Desgin and now lives and works in New York City. He won the NY Book Award in 2004 for his book of 3-D Alphabet called Univers Revolved, and the World Changing Ideas Award in 1999 for his work at Saatchi & Saatchi. A book has also just been published about his most recent work, The Bubble Project, where Lee places speech bubbles on ads across NYC and allows the passer-by to fi ll the empty space. www.thebubbleproject.com, www.pleaseenjoy.com

Michele Sala is an Italian designer who, in 2005, at the time of this interview, was researching postmodernism and the history of graphic design at Parson’s School of Design, also in NYC.