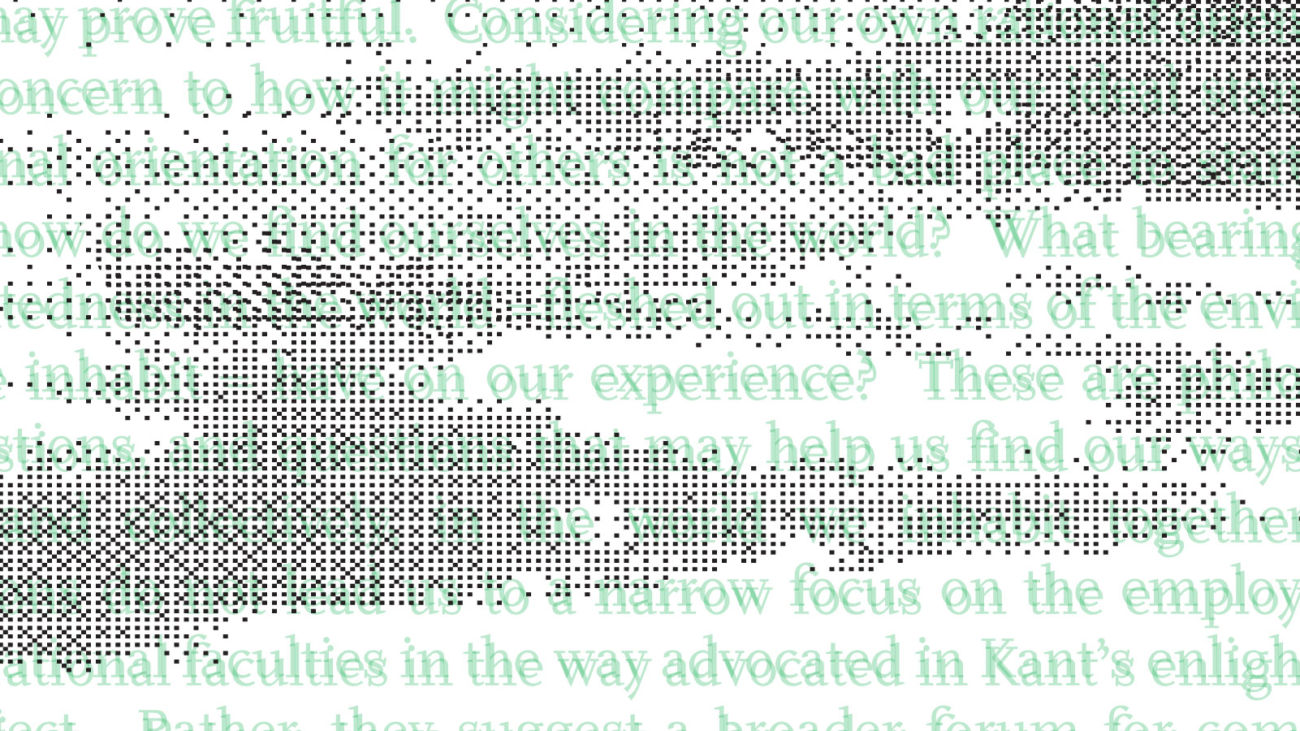 A discussion of Kant, the sky, and the ways in which we come to find a sense of personal orientation in our lives.

In his essay, “What Does It Mean To Be Oriented In Thinking?,” Kant asks us to consider the following thought experiment: first imagine a viewer looking at the stars in the sky, then take away the body and imagine only the viewer’s consciousness of the sky. Next imagine that by some miraculous event the positions of the stars were reversed from the eastern edge to the western edge of the firmament. Failing the orientation provided by a body in terms of which we may distinguish left from right, Kant claims, the disembodied viewer would be in no position to perceive any changes in the configurations of the stars. As Kant puts it, we require a subject-oriented perspective, in terms of which we distinguish left from right, in order to orient our topography and distinguish direction. Distinctions such as east, west, north, and south are not to be found as such in the landscape itself, but only in the subject’s orientation to the landscape.

Analogously, Kant suggests, in the absence of those needs and assumptions which orient us, our capacity to reason remains undirected. If our “body” of needs and assumptions is not there, our reason has no direction. Kant sees reason as an “objective” faculty, and it is only in the presence of our subject oriented needs and desires that we can use our capacity to reason in an oriented way, in a way that is directed. Refusing to acknowledge our needs and desires does not make them go away, but tends rather to smuggle them into our picture of reason itself. When this happens we will appeal to reason to argue for what we want without recognizing that that is what we are doing. Hence we are better off to recognize our needs and acknowledge them for what they are in the beginning since, in either case, they play their part.

Equally, however, we should not abandon reason in an unregulated pursuit of our needs and desires. This emphasis on freedom to the exclusion of rational constraint produces what Kant calls “Schwärmerei,” enthusiasm. In this case also, but for the opposite reason, our tendency will be to inflict our needs and desires on others without any concern for how it might affect them.

To evade both of these extremes, Kant proposes the following maxim: ”To make use of one’s own reason means nothing more than to ask oneself, in the case of anything that one is asked to assume, whether one would indeed find it practicable to make the reason why one assumes something or the rule that follows from what one assumes into the general principle of one’s use of reason.”

Kant’s maxim opens out onto the related question: would we want the reasons we are giving for our own actions to be the general rules which others use also? As Hans Blumenberg points out, the freedom which Kant promotes is “not an arbitrary but a lawful freedom”: one which recognizes that in using reason we (collectively) always depend on a multitude of assumptions which are needed to fill out our orientation in the world, the world in which we live together. These needs must be socially integrated in a coherent way, and the capacity to make the reasons for our own assumptions the reasons for everyone else’s assumptions as well provides a picture in which everyone’s lawful freedom can be integrated together harmoniously.

But, in fact, the ways in which we find ourselves oriented in the world speak to many different dimensions of the human experience, and we possess these orientations in ways which are often not compatible. Differences in orientation, such as religious, political, or sexual orientation, lead to some of the deepest problems facing a society which seeks the promotion of freedom within the context of the rule of law. Freedom of religious and political expression, and the personal freedoms associated with sexual orientation and practices are, within reasonable limits not specifiable in advance, a necessary condition for a free society, but the protection of these freedoms equally opens up a ground for political, religious, social and ethnic contestation.

Although it provides nothing like a universal solution to this dilemma, Kant’s notion of charting a middle path between rational dogmatism and anarchic freedom is a good one. It suggests that we would do well to bring our various forms of worldly orientation into proximity with Kant’s question by asking: when I enlist my rational capacity to express or argue for the needs associated with my self-orientation, am I using these capacities in a way I would warrant for others as well, particularly for those whom I find have self-orientations different from my own or in potential conflict with them? Kant gives the philosophical orientation which this question indicates a name: he calls it an “enlightened” orientation. But how does this philosophically “enlightened” orientation bear on the various non-philosophical orientations mentioned? More generally: what is a philosophical orientation, and what bearing does it have on the way we live our lives?

These are large questions, not to be answered here. But a start can be made. Once we recognize that we all enlist our capacity to reason both in expressing and in defending our various senses of self-orientation, it is clear that Kant’s philosophical notion of selforientation is not disconnected from our senses of political, religious, sexual and ethnic orientation. But Kant’s conception of philosophical self-orientation solely in terms of an appeal to our capacity to reason, while not obviously mistaken, is almost certainly too narrow. For more broadly, our philosophical response to our condition in the world finds expression not just in explaining and reasoning, but also in questioning and wondering.

In this latter regard, perhaps the strangest aspect of our various political, religious, sexual and social orientations is how we find ourselves thrown into them. I did not choose to grow up in the United States or in the Protestant church. I did not choose my racial or ethnic affiliation, nor did I choose to grow up in a predominantly heterosexual and largely homophobic society. Perhaps even more pressingly, the extent over which we may make choices about these orientations later in life is largely unclear. I have left the Protestant church, but not the United States. This bald way of stating the facts, however, conveys none of the sense of my ambivalence about both. And in general, such facts fail to capture what is interesting about our choices regarding such alignments and refusals of alignment.

In such a complicated context, a broad notion of philosophical orientation may prove fruitful. Considering our own rational orientation with concern to how it might compare with our ideal standard of rational orientation for others is not a bad place to start.Simply put: how do we find ourselves in the world? What bearing
does our locatedness in the world –fleshed out in terms of the environments we inhabit – have on our experience? These are philosophical questions, and questions that may help us find our ways, individually and collectively, in the world we inhabit together. These questions do not lead us to a narrow focus on the employment of our rational faculties in the way advocated in Kant’s enlightenment project. Rather, they suggest a broader forum for communication which may help us to become more conscious of the values we adopt, the needs which lie behind them, and the difficulties of integrating them in a way which ensures freedom within a harmonious social context. In all of these ways, they inherit and develop the vision of philosophical orientation we already find expressed by Kant, and suggest that a consideration of philosophical orientation can be a productive tool for improving our common condition of living together, in this world.