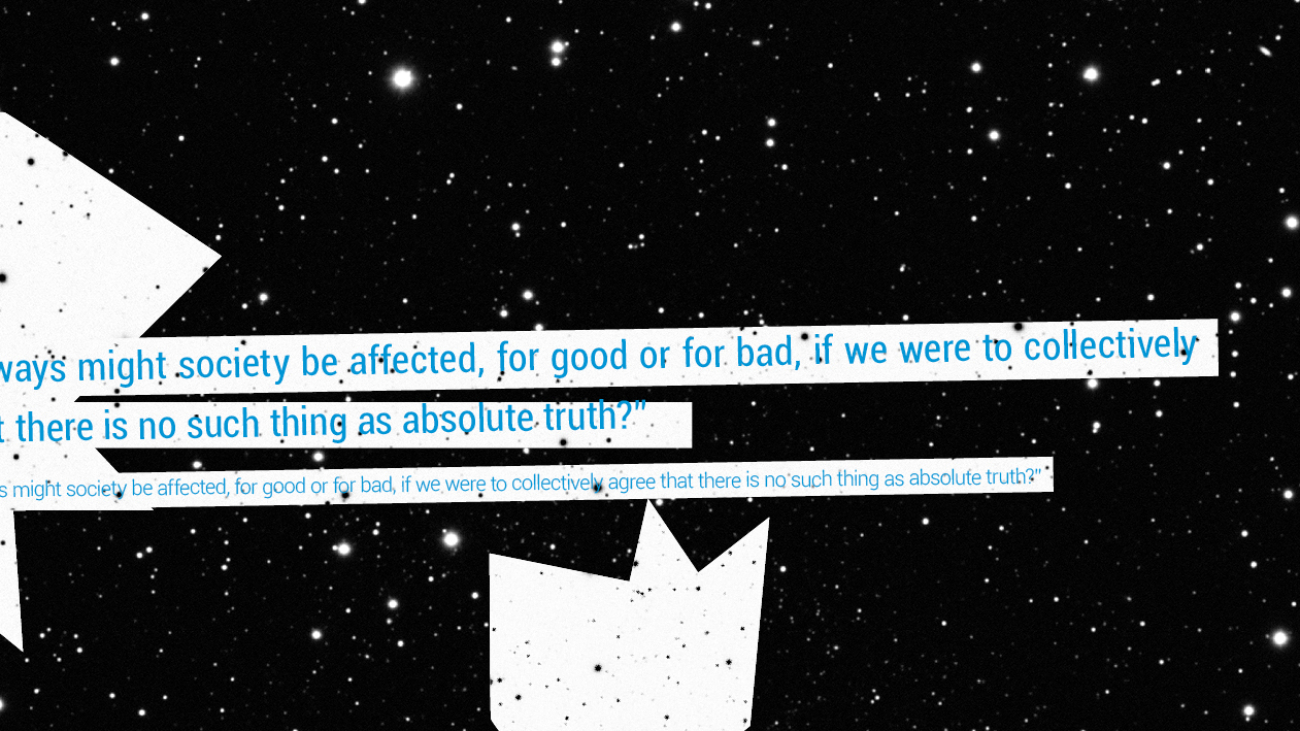 Some think that we have collectively agreed that already, perhaps not unanimously but by a large enough margin. Many of those think the result is a catastrophic relativism: the sort that Pope Benedikt preached against on the eve of his elevation to the throne of St. Peter. Other think it is a good thing: a liberation from a tyranny almost as irritating as that of our parents once was, or that of God, or the Pope. They think that by jettisoning absolute truth, we enter a new kind of liberation, in which a plurality of opinions are allowed to flourish, and all claims to unique authority are finally banished.

My own view is that there is such a thing as truth, and that the word “absolute” is best left out. By saying that there is such a thing as truth, I just mean that various things are true. It is true that Berlin is east of London, that it is further from Frankfurt to Sydney than it is to Delhi, that in cities tigers are best kept locked up, and that steel is better for bridge building than straw. Anyone saying otherwise is wrong.

Are these things absolutely true? Well, they are good candidates for being certain. I would not like to hear that my airline does not believe the first two, the police disagree abut the third, or our road engineers about the last. After that, I don’t know what might be meant by saying that they are not “absolutely” true. If it implies some kind of scepticism, then I would offer philosopher G.E. Moore’s response, that these things, and thousands of others, are more certain than any philosophical argument for scepticism.

So is there nothing to be said for the pluralist or relativist side? Well, not all questions are cut and dried. Some words are slippery, and mean different things to different people, and sometimes our categories feel inadequate (was Mozart a Romantic? Is mathematics an art?) Some questions resist unique answers. Big moral questions and big historical questions can’t be answered shortly, or in just one way (was colonialism a bad thing? Is modernity working?). There are many ways of telling the history of a period, with different shadows and highlights.

All this should give us a proper sense of toleration. Different opinions must often be heard. Our first ways of framing a question may not be the best. But there is a big difference between proper respect for different voices, and “anything goes” relativism. The first is a good thing. But respect must be earned. Nobody would respect my singing voice if I strolled onto the stage of La Scala. To earn respect, different voices need practiceand training, and when we start saying things, that means respect for evidence and truth. Lose that, and the barbarians come back.

Simon Blackburn is the author of the bestseller Truth: A Guid e for the Perplexed (2005). He is currently Professor of Philosophy at the University of Cambridge. Other notable books of his include Ruling Passions (1998), Think (1999), Being Good (2001), and Lust (2004). Blackburn is a frequent contributor to Philosophy Bites and former editor of the journal Mi nd.