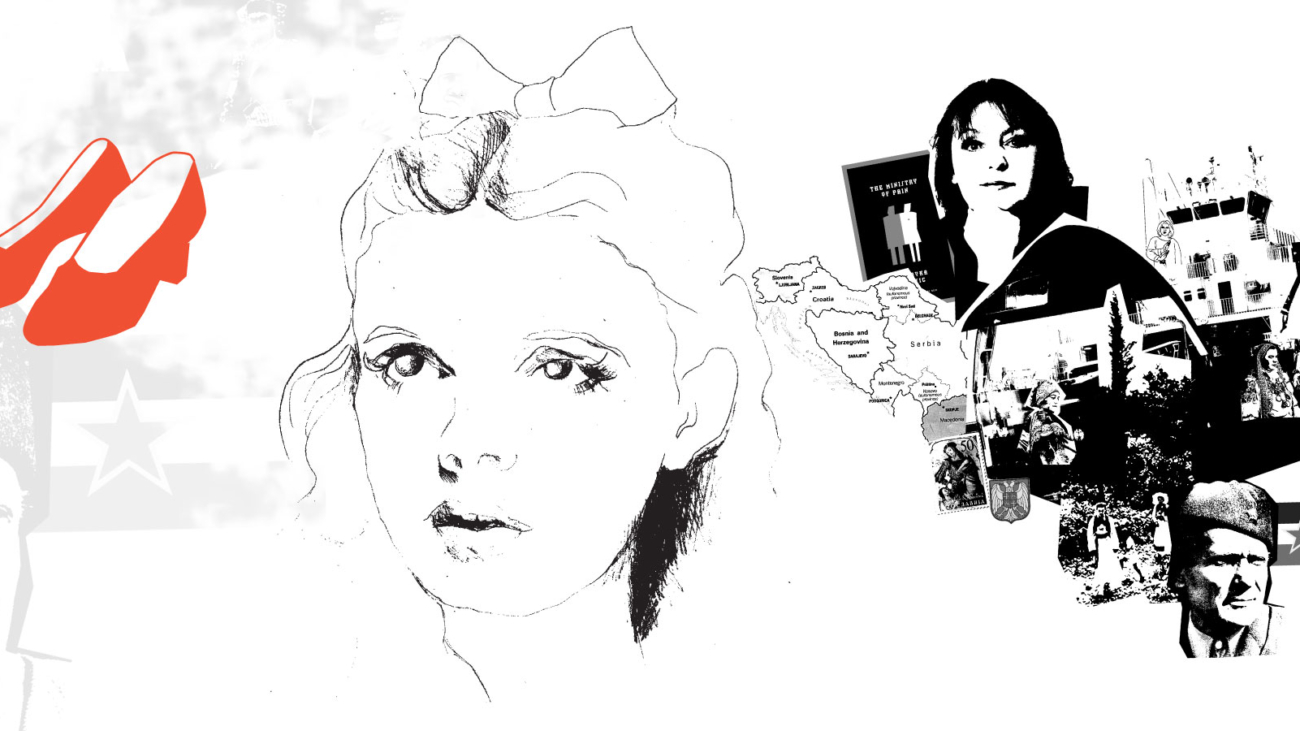 On Building and Destroying the Ties that Bind

There’s no place like home. There’s no place like home. There’s no place like home. Repeating these words, Dorothy closes her eyes and begins to click her red ruby slippers. One, two, three clicks of her heels and she finds herself returned to the safe confines of her Kansas farmhouse. Her journey away from home and into the Land of Oz turns out to have been a mere dream. But for Tanja Lucic, the narrator and main character of Dubravka Ugresic’s latest novel, “The Ministry of Pain“, no magical slippers and no amount of wishing can return her to her home: it no longer exists. Franco Tudjman, SlobodanMilosevic, and their followers, have made mince meat of thecountry she once called home – Yugoslavia. Ugresic once called Yugoslavia home too. Similar to her fictional creation, Tanja, and thousands of other Yugoslavs, Ugresic fled after hostilities broke out in the early 1990s. “We had scampered out of the country,” Tanja explains, “like ratsdeserting a sinking ship.”

With her country of origin erased from the map, commentators often do not know where to place Ugresic. She is frequently labeled either as a Croatian or an ex-Yugoslav writer. Yet, Ugresic is cut in the mold of a traditional central European intellectual: in addition to being well-versed in European letters, she is comfortable in several languages and is as likely to be spotted in her adopted home of Amsterdam as she is in Berlin or at a North American university. Over the years she has received numerous prizes for both her fiction and essay writing, including the Austrian State Prize for literature and Italy’s prize for best foreign author, the Premi Lettario. Like Joseph Roth, whose longing for the Hapsburg Empire filled his novels and short stories, Ugresic’s work is preoccupied with loss. Unlike Roth, however, who chronicled the last days of the empire carved up by the First World War, Ugresic dwells on life post-dissolution. In her novels, “The Ministry of Pain“ and “The Museum of Unconditional Surrender“, she uses the voice of a melancholy female narrator to explore the ongoing state of displacement and nostalgia into which many former Yugoslavs fell during the Balkan Wars. In “The Ministry of Pain“, after fleeing Zagreb and parting ways with her husband, Tanja Lucic accepts a temporary position at the University of Amsterdam. As a guest lecturer of Yugoslav literature, Tanja is confronted with “the absurdity of [her] situation.” She is assigned to teach a classroom of ex-Yugoslav refugees “a subject that no longer exist[s].” Instead of sticking to a traditional syllabus Tanja asks the students to play a game in which they create a virtual “Yugonostalgic” museum. Together they recollect the salvageable parts of the Yugoslav everyday: television shows, songs, food, poetry and remembered images and encounters with the former Yugoslav leader Tito.

In an exchange of emails, I asked Ugresic to share her thoughts on why these rather common aspects of a community play such an important role in her novels. Her answer surprised me. Pieces of the everyday, she maintains, create the sense of unity among ex-Yugoslavs. Not shared ideology, she replied, but “trivial things make the strongest bonds: food, songs, popular culture, etc… Fragments of popular culture are the strongest glue.” In “The Ministry of Pain“ Tanja and her students, though of diverse ethnic origin, bond together over drinks while fondly reminiscing about old Yugoslav folk and rock songs and the national anthem. Through scenes like this one, Ugresic paints a vivid picture of how Yugonostalgia, similar to its East German counterpart Ostalgia, can bring ex-Yugoslavs together through shared memories of popular and material culture. Ugresic is right in pointing out that various forms of culture may unify an otherwise diverse group. But ties based on nostalgia have an inherent weakness: they only surface in the aftermath of a lost world of experience. That is, members of this potential community do not recognize their mutual interests until the very things that might have brought them together have already disappeared. Absence makes the heart grow fonder.

Ugresic confirmed this supposition when I pointed out that in “The Ministry of Pain“ the meaning of “we” is constantly redefined. At times Tanja uses a more narrow defi nition of “we”: it refers only to those from the former Yugoslavia. When Tanja sees her students, who were all Yugoslav refugees, for the fi rst time she instantly recognized them as “[her] people.” “‘Our people’ had an invisible slap on their faces…The ourness came through in a certain strained melancholy in their features,” she observes. In other parts of the novel, however, “we” refers to everyone from the former socialist countries of Europe. In one passage, Tanja weeps uncontrollably upon watching “The Unbearable Lightness of Being“, which includes a cinematic depiction of the Soviet invasion of Czechoslovakia in 1968. “I wept in my innermost being over the imaginary tangled web that bore the arbitrary label of Eastern, Central, East-Central, Southeastern Europe, the other Europe. I couldn’t keep them straight: the millions of Russians who had disappeared into Stalin’s camps, the millions who had perished in the Second World War, but also the ones who had occupied the Czechs and the Czechs who were occupied by the Russians – and the Bulgarians who fed the Russians and the Poles and the Romanians, and the former Yugoslavs, who basically occupied themselves.“

Tanja is not the only ex-Yugoslav in the novel who feels connected with members of “the other Europe.” A Bosnian man, who Tanja met in Berlin, describes how he used to spend his entire refugee allowance on a Russian prostitute. She is worth it, he claims, “Because she’s a Russian, one of us. I wouldn’t throw my dough away on a German girl. Those German girls have no soul. Not like ours.” Considering the history of mutual animosity between such groups as Poles and Russians, Hungarians and Romanians, it is surprising to see all the former socialist countries of Europe lumped together in one group like this. Even the Czech novelist, Milan Kundera, was careful to exclude certain inhabitants of communist Europe—most pointedly Russians—from his definition of central Europe, which he famously defi ned as “a shared fate.” With this history in mind, I was skeptical that members of “the other Europe” recognized themselves as part of a group while the communist system was still intact. So I pressed Ugresic on this, asking her: Do you think that Poles and Ukrainians or Romanians and Hungarians feel a sense of solidarity when confronted with each other? Ugresic acknowledged that during communism she did not feel that there was astrong sense of solidarity, despite offi cial slogans that had boasted otherwise. “Yugoslavs,” she pointed out, “thought that they were better than others. The same concerned Poles and Romanians.” These groups “thought that their life was better and that they were better.” Only once the system that had “made them quite similar” had disappeared did she see any evidence of “solidarity” or rather a “recognition of the same past.” In other words, it was only in the shadow of a world gone by that ties emerged between members of the former socialist Europe. Real “solidarity,” Ugresic believes, will come in the future. “It will come from the young people, historians, sociologists, etc. It will come when [their] inferiority complex, personal and collective, is completely gone.” Shared nostalgia for a world gone by is only one means of forging bonds. Perhaps there are other forms of unity, based not on the past but on experiences in the present.

The common fate of statelessness, I suggested to Ugresic, can also bring people together. As the French philosopher Ernst Renan pointed out as early as 1882 “suffering in common unifies more than joy does.” I wondered if this resonated with Ugresic’s experience as an exile. “Not necessarily.” she answered. “It could be the opposite.” Having just fled your country of origin the last thing you want to do is join your countrymen somewhere else. After all, you left because you rejected membership in that community. Still many people tend to turn to their fellow expatriates after their initial arrival in a new place. As she put it, “I would say that people depend on each other in the first phase of their exile. A bit later, if conditions get normal, they tend to live their own life, independent of [their national] community.” Do bonds forged through the common experience of exile ever go beyond national, religious, or ethnic ties? In her current home of Amsterdam, I wanted to know, did she feel a link with non- European refugees? “My story is a bit different,” she reflected, “I didn’t have a refugee experience, or refugee status.” She chose to live in Amsterdam. When she arrived in the Netherlands the ex-Yugoslav community was already settled. She was a newcomer and more like a guest. Another reason she does not necessarily feel a connection with non-European refugees is because there are “completely different experiences of exile. In that respect, Yugoslav refugees, for instance, had incomparably better status than refugees from Africa or Asia.” She therefore advised caution when discussing “exile” as “not to hurt the feelings of those who really suffered.” Particularly in the context of the newly expanded borders of the European Union, where can we find hope for creating ties that bind? Deeply entrenched prejudices and hardened stereotypes present formidable obstacles to potential unity between members of the “old” and “new” Europe. As Ugresic once wrote in a satirical essay about stereotypes, “Prejudices are the European past, present and future.” Curious as to whether she still maintained this position I asked her if she thought that the EU project, with such initiatives as the Erasmus student exchange program, could help to break down age-old European stereotypes. Ugresic replied that, on the one hand, there has been improvement in this area. “On the other hand, you never know: unemployment, social insecurity and media could bring the worst stereotypes back at any moment.”

The ties that bind are often fragile and easily torn asunder in times of acute economic and political crisis. However, Ugresic’s own story makes clear that it is perhaps never too late to build ties of belonging in a new community. Ugresic, like many of those ex-Yugoslavs who were cast adrift when their former homeland disappeared, has learned to make peace with her new country. She responded affi rmatively when I asked her if she considered Amsterdam home. “Yes, I do,” she replied, “with all the feelings one could have when the notion of home is in question. These feelings include a wish to run away, to return, a feeling of claustrophobia, a feeling of security… True, all those emotions are gentler now; they are not so strong and sharp as they used to be.”

The author Dubravka Ugresic was born in 1949 in Kutina, Yugoslavia, today Croatia. She worked at the Insitute for the Theory of Literature at the University of Zagreb for many years. Ugresic lives in Amsterdam now, spending a lot of time teaching in the US as well. Her books include “Steffi e Speck in the Jaws of Life“, “The Museum of Uncontional Surrender“ (1998), and “The Ministry of Pain“ (2005).