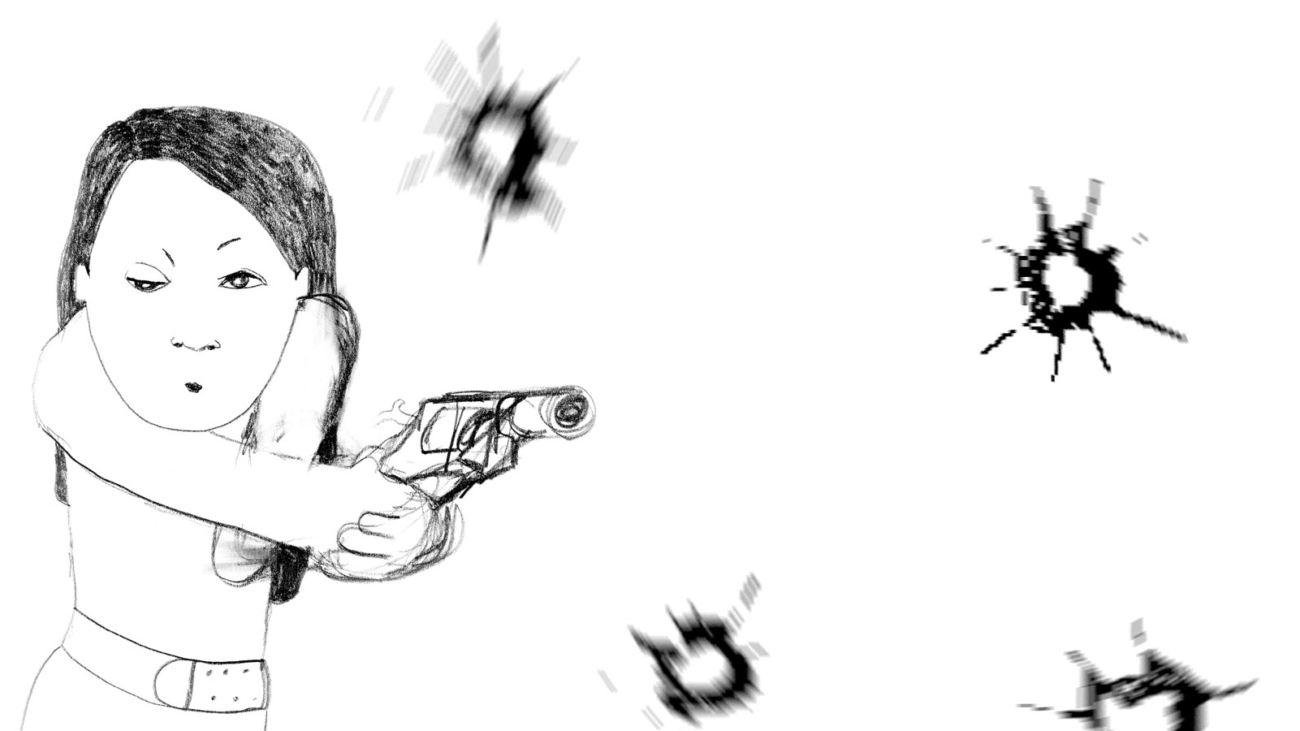 You sit back down nude, this time Indian style. You’re making good decisions. Like all your favorite things, the posture’s both uncomfortable and comforting. It recalls a lost world, of kindergarten symmetry, of surrender, of waiting. Obviously, you want to get this one right. You’re posing for your last picture. You’ve turned – or really, because you’ve barely moved since you woke up three afternoons ago, you’ve left all the lights off. The little candle in front of you is thrashing, when it drowns you revive it. You keep replacing the shotgun with a cigarette. You’re sick of all this symbolism, but even more of the solipsism that, like a torch song stalks a broken heart, would have you believe you’re attracting these symbols, that you’ve reached a centripetal level of perception, center stage, that innermost ring in which all is resolved (calls it quits, the long lost passport reappears). That in your transcendent despair you’ve become a kind of Magnetic Resonance Imaging machine. A metaphor magnet.
You’re in the imagination room. Where else.
Imagine all the people.
And you try to. A last gesture, embracing friends and enemies,
all-forgiving as a Pope, as a Coke commercial.
Imagine all the people.
But guess what, you can see only one; it’s your dad’s favorite song.
This is not about forgiveness, but revenge.
You do another speedball. Outside, the day takes a last breath before dusk. There’s that cool logic in the air. Citrus clarity. Some of which you actually seem to possess. Alone here, in your dome in the sky.

Which you realize, in this closing couplet of serotonic epiphany, is the perfect emblem to cinch your conceit; a big white seashell, yanked out of context, then displayed up on a shelf—outward symbol of harmony, but full of infinite roar.

At any rate, unless the market keeps soaring at the rate you’d banked on, the massive mortgage you’ve leveraged will break you. It would appear other things have broken you.

The laws of work don’t apply now. Which brings you back to the adolescent existential dilemmas: if space and time aren’t infinite, but infinitely expanding, then what’s beyond them? You see your failure to comprehend nothing is a refusal to believe in it. Like the threat of terrorism. The problem, as always, is egocentric; nothing offends your sense of self. But only empirically; you can’t stomach the thought of your imagination as a preset of cells. Dimly, you suspect the hole you can’t fill in yourself is one in the space/time continuum through which you’ll slip and find that self waiting, cured. That all this rationalization might only be a survival tactic is only more evidence there’s a reason for survival. Or else why would the world go to such trouble to keep believing in itself? Which is why, coming full circle to that innermost circle, you haven’t pulled the trigger. Your failing at this ultimate failure is the final contra passo.
Or maybe you’re just scared.

Listen to the waxy silence.
Inside it, the diligent clock in the hall chews time, like it’s celery. And that seems about right, right? Growing up they never told you how boring it’d be, how you’d spend your life wishing you were somewhere and someone else. Or maybe that’s just you. Or maybe, no. Maybe, despite all your strokes, on a Darwinian level your brain’s way past its due date; maybe this despair’s only a sort of frantic ennui, because all of these chemicals— your memories, your wisdoms—have been too long embalmed by elixirs. Maybe time is trying to tell you something.

The clock in the hall reminisces, striking chimes.
It strikes you: How little you know yourself. How much less you did each year.

You see you’ve defined yourself by setting limits and then breaking them. That you’ve confused exploration with violation. That your madness is an ever expanding detachment from this second self you’ve come to call you. That there’s probably power in this, but that you’ve lost the will to yoke it.

Before it was always vanity that saved you. So you stagger to the triptych medicine chest mirror. Your final performance, paranoid panorama, infinite hall of reflections, where illusion and origin lose sight of each other.
Endless you. A million ghouls. Man of rags.
The drooling toothpaste tube is unbearably messy. You run cold water over your burn. You’ll miss all this self-pity most of all. It’s sustained you this long. It’s all the longing you’re tired of, but it did keep you living. To live is to long, to live is too long.

Just go back and do it.
Sit down. Root the pacifier back in your mouth. The taste of steel is: deeply alien, sterile, boring. You’re certain the several organ-donor forms you’ve filled out over the years will fail to find those organs.

You cock the gun. You’ve never gone this far and you get an orgasmic little shiver. How can something so counterintuitive feel so inevitable?
This is it, this is it. The last moment of consciousness. This is it.
Maybe you should give it another year, you’re just not famous enough is all.
But isn’t fame the artist’s enemy? Shouldn’t you have the sixth sense, the uncommon courtesy, to know when to implode already? Maybe you shouldn’t end it here in Lullabiss either, it’d be so much more appropriate to dissolve in Demerol and Bleecker Street rain. Don’t you owe it to Manhattan to let it know what
it’s done to you, to lose on home turf?
No. You can do this. You deserve this.
Outside, the crickets have forgotten how to scream.
The sun leaks through the Venetians.
You open them up. A last look at the world. The approaching darkness is a finger being lifted to lips. Annabelle’s bike in the driveway leans on its crutch. On the patio, her slingshot’s a man who’s thrown up his hands.
Enough. Stop turning the world into you. Where did that ever get you? That world was full of too many things. Things you didn’t own or understand. Remember? That was the problem.
It was artistic. The space between what you always heard in your head and what you were able to express. The unspeakable possibility.

It’s nearly dark. You nodded off.
You were drooling down the barrels.
Will your father cry?
You’re not crying. That water’s too deep.
···
You’ve labored under lots of things, mostly self-imposed, and one of them is no longer illusion. You know your crimes. You’ve found guilt instructive. And it’s not that you’re nostalgic for the person you don’t want to be again. You’re nostalgic for the life you didn’t lead. You didn’t give enough gifts. You didn’t have enough laughs. You weren’t so kind.
The artist thinks he can revise what he’s written. He believes in erasers. That the past can make him happy, instead of only wistful. Life is short, but regret is forever. This is it.
Since you were two, through sexual charm and keen helplessness, you’d managed to turn a few degrees away from the onrushing moment, to dodge the final fact, as now you struggle to get outside your skull before he sees it on the wall, your thumb searching the gunstock’s gridiron for encoded signs…you have to finally face it.
This is it.
In the distance, twinkling in the canyon, people are chanting Happy Birthday, then the disappointed applause.
···
You begin to squeeze the trig–and suddenly, cinematically, your truest friend comes wobbling
into the Imagination Room. Her paper-thin ears full of dusk. Favoring a front paw, she sits down beside you. From the buzz and thud against a distant window, you realize she’s been beestung.
“Oh, baby, I’m so sorry,” you pull her onto your lap. “I know. It’s not fair.”

And you’re flooded with tenderness, for her, for yourself, but then all for your father.
After the passage of some unaccountable seconds, the dog is standing with her front paws on your chest. Licking your tears. Almost laughing, you’re almost able to forgive the fact that it’s only for the salt. You take her front paw and you stroke it. Until you can no longer feel it. Or your own burned palm. In fact, you feel nothing. And now the tune comes to you. The one you’ve been waiting all your life to write. Only now it writes you.
It is a reprise. A return to an ordering instinct. It’s been waiting. Conspiring. Now released, it has value. And like everything sane, it seems it had nothing to do with you. As you sing it, the voice echoing through your vast
empty shell is not your own. But then slowly you realize you are channeling, yourself. That it’s the first thing you’ve owned. That all of it’s out of your hands now. Exempted, exalted, you imagine, drifting, as white light hums in your veins, this song whispering to a million imaginations, forever ago, to the cave man taming his fire, to Leibniz dreaming calculus, to Michaelangelo freeing slaves from his marble.